Who doesn't get excited about Moss Phlox in the spring.  In the Midwest, and through the temperate world, frankly, it's one of the signature plants of early spring, forming characteristic carpets of flowers in various shades of pink, lavender, coral, and white.  When a plant is so widely cultivated, it's easy to lose track of their origin.  Sometimes plants that are common in cultivation are rare in the wild, so the whole situation begs several questions: "Why would a plant that is rare in the wild be so adaptable and commonplace in gardens and landscapes?" or even, "Did garden cultivars originate as wild plants or were they selected from gardens or the products of hybridization?"  The list goes on.  Questions like this can have exciting answers, but unfortunately, we do not know many of these answers.  I like to think about things like this.  I also like to find these common garden plants in the wild and study them closely.

I recently "rediscovered" a population of moss phlox (Phlox subulata) in Delaware Co. OH.  This is a natural population of this species with herbarium specimens dating back over 130 years.  This is a unique part of the county, referred to on old vouchers as 'Red Hills'.  These aren't  quite like the red hills in McCreary Co. Kentucky or central Alabama, but if you squint when you look at the cliff line in the first couple of pictures, you can see what the early botanists were talking about when they mentioned this. 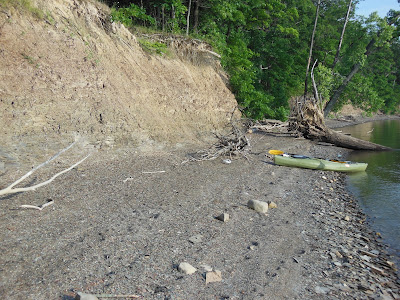 Can you see the Phlox? 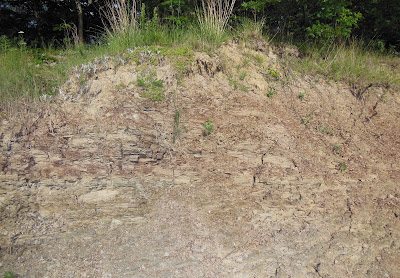 Now can you see the Phlox? 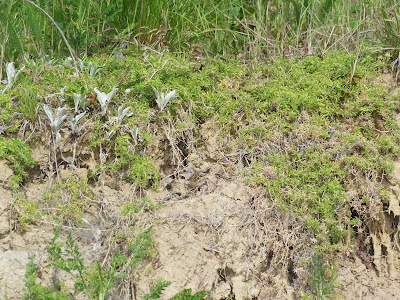 The shiny green mats of Phlox subulata, the moss phlox.  It would have been a hell of a lot easier to see these if they were in flower (flowers are reported as ranging from pink to white in this population).  The largest, fullest plants can be found at the edge of the cliff. 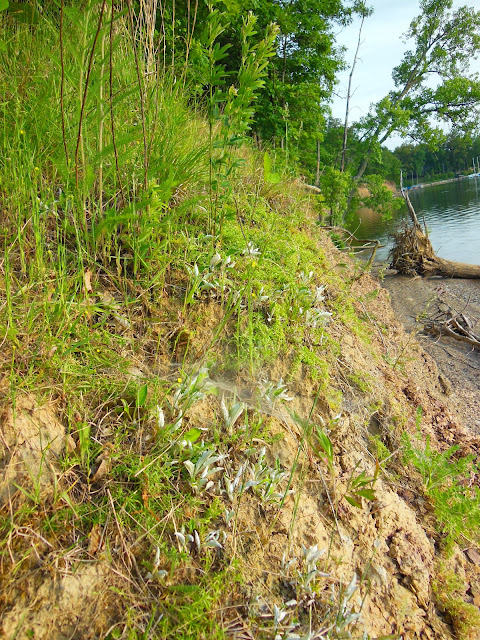 Phlox subulata and an Antennaria species putting forth their best effort to control erosion.  On the top of cliff, the plants could be found in a slightly different setting. 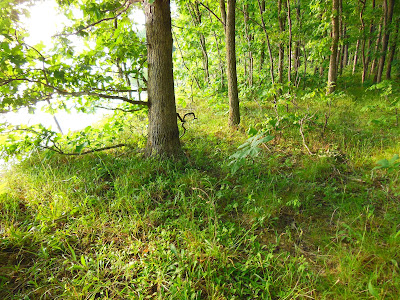 The open, oak woods, composed mainly of stunted Quercus rubra had many interesting plants growing in the understory, but the most interesting to me were the thin, straggling stems of Phlox subulata winding their way throughout the forest.  I can't wait to see these plants in flower next spring!

Posted by Botanica Za Les at 9:05 PM No comments: 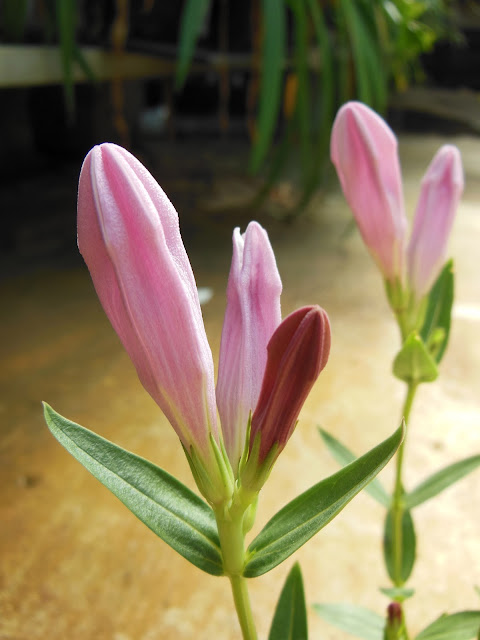 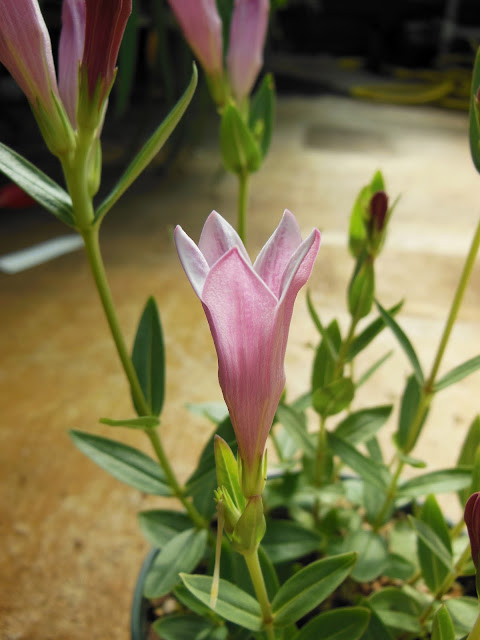 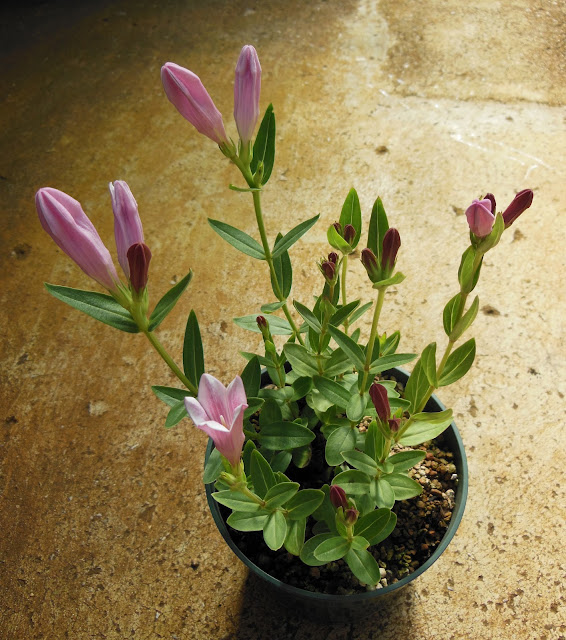 I am loving this Spigelia gentianoides var. alabamensis.  This exceedingly rare variety of an exceptionally rare species hails from the Ketona Dolomite glades in Alabama.  This stupendously biodiversity rich area was discovered only in the mid-1990's, and contains many endemic species that are both botanically and horticulturally interesting plant species.

The Alabama variety of this species is segregated from the typical form because the corolla lobes (petals at the tips of the tube) reflex, or open, there are more flowers per inflorescence, and differences in vegetative characters.  The flowers open in the late afternoon, presumably so pollinating insects can enter.   As night falls, the flowers close, and may trap potential pollinators.  This is purely speculation on my behalf, but it should be known that virtually nothing has been published about the pollination biology of this species.

Supposedly this species is self-fertile and I am attempting to generate some seed production through hand-pollination.  This is a dainty plant, reaching about 10 inches in height.  It could be a fantastic rock garden plant and symbol of U.S. native plant conservation.

Posted by Botanica Za Les at 10:08 PM No comments:

You need to check out Far Reaches Farm

I recently discovered Far Reaches Farm, and let me tell you, if you don't know about this specialty  mail-order nursery in Port Townsend, Washingon, you, and your garden, are missing out in a big way.  I was initially attracted by an offering of Clematis otophora; this is the first offering of this species into U.S horticulture, and collected by the proprietors on an expedition to China.  This is only the beginning though.  Searching their extensive inventory reveals many unique plants; rare highland Maianthemum species from Guatemala, esoteric Hepatica selections, terrestrial orchids, Asian and European woodland species, and many, many more choice and nearly impossible to find horticultural specimens.  This is one of those great catalogues that entices and educates.

I couldn't help myself, so I placed a small order.  The plants I received were large, robust, and well-established. The plants were well-labeled, and mention that the nursery uses no peat moss, non-organic herbicides, insecticides, or fungicides on their plants.  What are you waiting for? 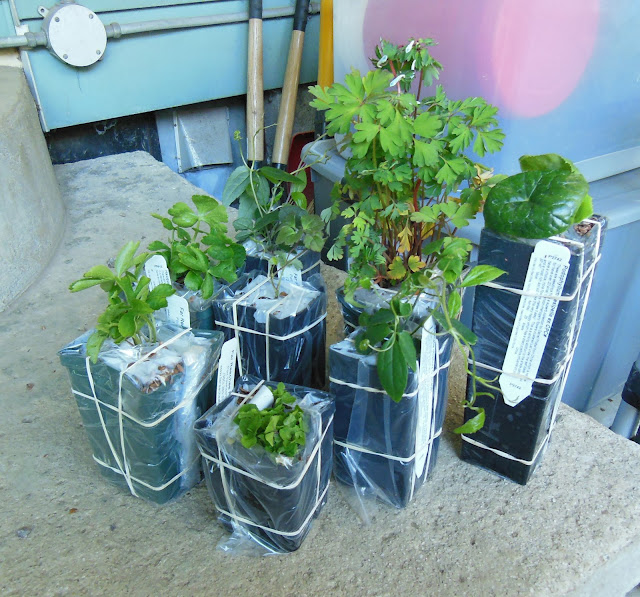 Here is my order immediately after arrival.  I could not be happier!  Note the deep band pot the Podophyllum versipelle is growing in, allowing this woodland species to develop an extensive root system despite the confines of the container.

Posted by Botanica Za Les at 9:37 PM No comments: 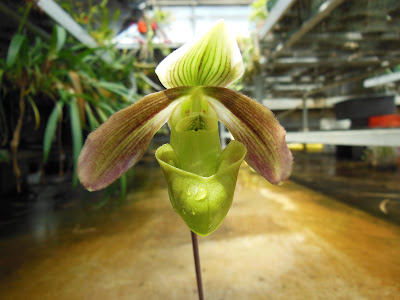 Here is the inaugural flowering of Pahpiopedilum violascens.  I purchased this plant about 2-3 years ago and growth has been abysmally slow, but the wait has been worth it.  According to Phillip Cribb's monograph of the genus, this obscure species hails from New Guinea and some of the surrounding islands; it is considered to be quite rare.  It also appears to be somewhat recalcitrant in cultivation, but this clone came from a select breeding line that took years of hard work and patience to develop. 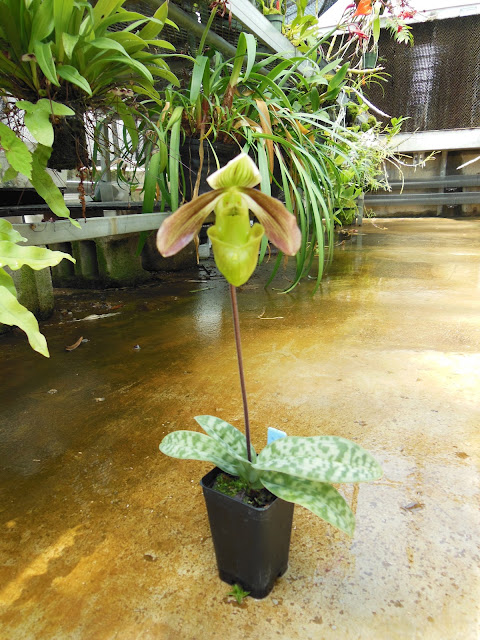 Here is a shot (albeit somewhat blurry) of the entire plant growing in a 2.25" diameter container.  The foliage is pleasing variegated.  This is a good this as the plant will not likely flower again for several years.  Such is life when it comes to Paphiopedilum species. 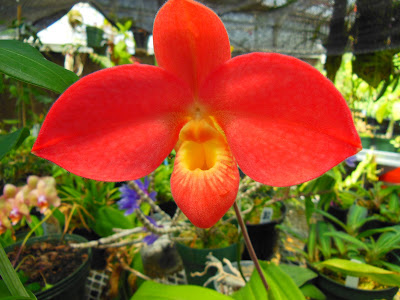 Here is one of the first flowers of Phragmipedium Fritz Schomburg.  This cross between the very recently described an highly desirable Phragmipedium kovachii and Phragmipedium besseae is stunning.  The flowers resemble a very large version of the latter.  I am growing a few of the P. kovachii hybrids and this is the first to flower.  I have found P. besseae and related species to be rapid growers that flower quickly and repeatedly once they obtain the right size. 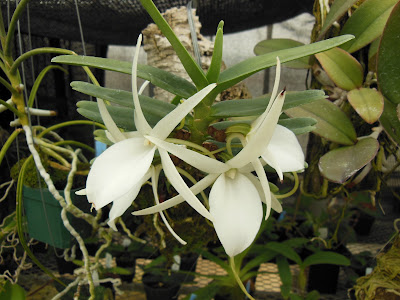 A stalwart of collection is Angraecum didieri.  This plant produces flowers in spurts throughout the year.  At dusk and throughout the night the flowers are exceedingly fragrant.  The fragrance is sweet, but has an undertone of raw hot dogs.  Yeah, that's right, hot dogs. 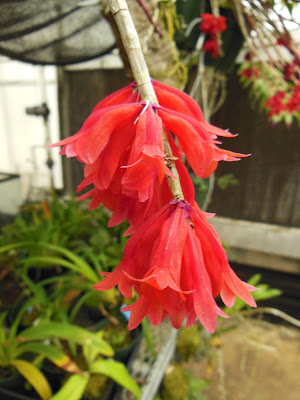 Here is Dendrobium lawesii.  The flowers last for moths and the canes can produce flowers for up to 10 years after the foliage senesces.  I include this species and it's many variants among my favorite of all plants. 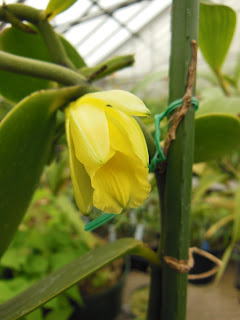 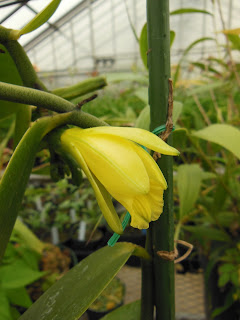 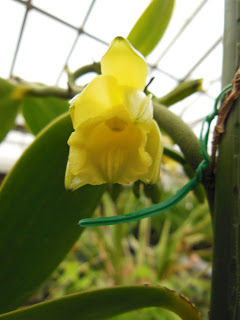 Perhaps I have saved the best for last.  This is a recent acquisition from a friend and long time Vanilla species collector.  Vanilla palmarum is native in several countries of northern South America.  It is also very appropriately named; this species grows only in the crowns of a few species of palms.  Here are few views of what appears to be an open flower.  There are a couple of more buds yet to open which I will continue to study closely.