A quintessential harbinger of spring

This is Eranthis pinnatifida (or Shibateranthis, depending on your taxonomic persuasion).  In my collection, this plant consistently flowers, with the protection of a moderately heated polyhouse, in February.  This thing is tiny and the plant photographed here has lived in this 4-inch pot for the last 4 years.  Despite it's diminutive size, it's quite tough, and would undoubtedly be hardy outside here in Columbus.  If not planted in a very special place in the garden, such a s trough or rock garden where it can be seen closer to eye level, it would be lost in the shuffle. 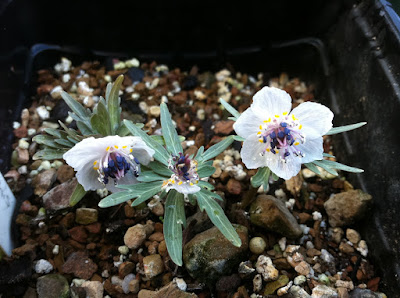 The anthers of this species are purple-blue, a rarity among temperate angiosperms (I can only think of Stewartia malacodendron and S. ovata as others at the moment), but the pollen is white.  The yellow anther-like organs are nectaries, used to lure in pollinators.  It wouldn't be surprising to think that color of the anthers provides some signal to pollinators as well. 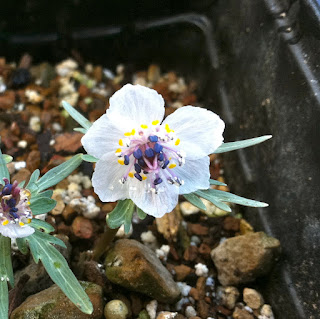 This Japanese native requires different conditions from the more commonly known and grown Eranthis hyemalis.  During the dormancy period (which lasts 9-10 months), the plant needs to be on the dry side, but not too dry.  I water the container about once per week.  Eranthis hyemalis is a great garden plant here, and can thrive in soils that are dry in summer.  I hope to try as many species of Eranthis as possible.

Has anyone ever been able to hybridize this species with any other Eranthis?

In Japan, this species is called Setsubun-So, and is revered by Japanese naturalists.  Here is a great link that discusses the meaning of the Japanese common name and other related interesting facts.