Botany on the Go: Phlox amplifolia in Tennessee

To me, finding Phlox amplifolia in the wild became something of a search comparable to that for some mythical and tantalizing treasure that always seems to be just out of reach. Initially I was told that locating it would be a menial task, but because so little is known about this plant and so few people have actually seen it, I had my reservations about the suggested ease with which it could be found.  My reservations proved to be true, as this summer I had searched several sites in Kentucky only to turn away without discovering even a single plant.  Recently, a friend gave me a location in eastern Tennessee that would be easy to find, and with best intentions, I convinced my wife to make a very abbreviated trip to the site.  Simply put, I just could not go through another winter without seeing this plant, and it didn't matter how much driving it would take to accomplish this task.  So away we went to eastern Tennessee. 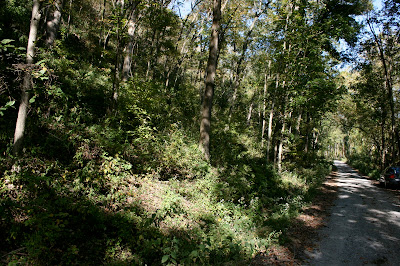 One can never be sure what to expect on these sorts of trips.  I half expected the plants to be dried out and dead, having shed there seeds and looked their best during the summer months.  So as we rounded the corner and a handful of flowering plants came into view, I let out a sigh of relief.   This relief was quickly followed by an immediate adrenaline rush as I clumsily started  to scour the forested, talus slope where the plants were growing.  It's always a good feeling when 7 hours of seemingly endless driving results in such unanticipated botanical bliss.  We were able to find hundreds of plants and enough (about 12) plants were in flower that we were able to assess some of the floral variation in this rarely seen and poorly understood taxon. 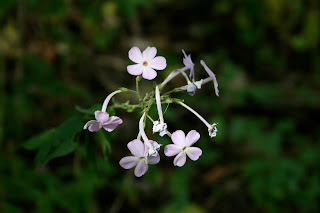 The last vestiges of Phlox amplifolia flowers in Tennessee 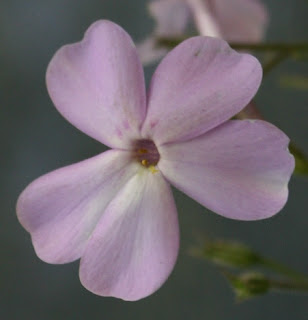 An close-up of a Phlox amplifolia flower.  Note yellow pollen (white in P. paniculata)
Mission accomplished.  But I can't take any of the credit for finding this site, as it is well known in some botanical groups.  The real task now comes in relocating this majestic species in its suspected haunts in Kentucky and beyond.  In an old paper, Phlox guru E.T. Wherry suggested that P. amplifolia is an ancient species that is dying out throughout its somewhat limited range.  Whether this is true or not remains to be seen, but it appears that this species is very limited in its ecological tolerances and that its particular ecological niche may not be that common.  Hopefully I can continue to develop this story and report more about it in the future.

From our point in Tennessee we headed east into North Carolina, camped for the night, and did some sightseeing at Linville Gorge the next day.  The fall color was in its prime. 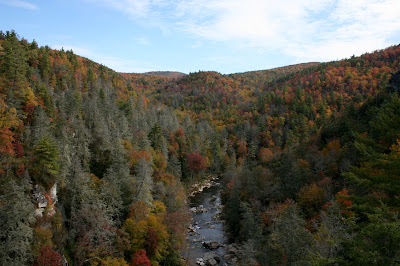 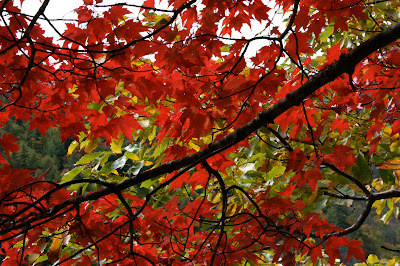 I don't normally get too excited about Red Maple (Acer rubrum), but even the most jaded plantperson can help but admire the scarlet autumn hue of some specimens. 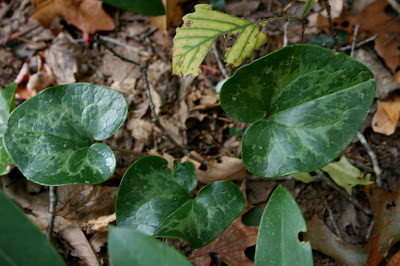 We also found this species of Wild Ginger (Hexastylis) growing near the Linville Falls.  There were both mottled and entirely green foliage forms, but without seeing the flowers, it's hard to be sure what species.    Perhaps H. virginica or H. heterophylla?
Posted by Botanica Za Les at 11:53 AM