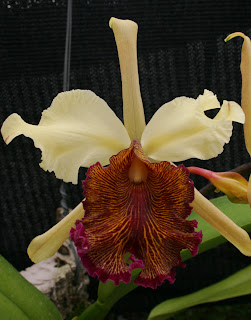 Cattleya dowiana var. aurea
Some things need to be seen to be truly appreciated, and in order to be seen, one could expend considerable effort an resources.  There can be a considerable number of reasons why this may be true, but it may be a long wait that is most excruciating of all.  Investing in seedlings of species orchids can come with this considerable caveat; while rare species can be inexpensively obtained, the amount of time and care needed to produce the first flower can be considerable.  While more extreme examples certainly occur, the inaugural floral astonishments of Cattleya dowiana var. aurea tops the list for me...and it only took 6 years! 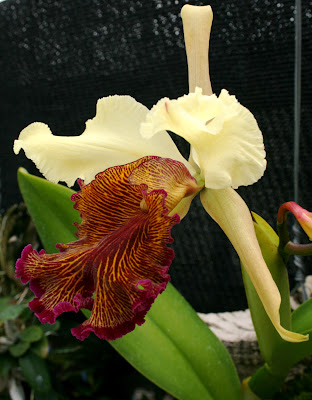 Unfortunately the photo does tell everything about the plant, and what is sorely missing is the intense fragrance of tea roses that emanates from each flower.

After drooling over pictures of this species for years, I purchased this plant as a small seedling in a 2.25” pot from the now defunct Hoosier Orchids in Indianapolis. That was 2005.  When I asked how long before it would bloom, I was told, quite simply, a long time.  Hmmm…not very specific.
Cattleya dowiana is known from only two locations, the rainforests on the Caribbean coast of Costa Rica and the northern rainforests of Colombia.  These areas are separated by more than 600 miles!  Cattleya dowiana var. aurea hails from the northern reaches of Colombia and is reputed to be the superior form of C. dowiana.  Sometimes it is given specific rank as Cattleya aurea, but this name has not been accepted.  Because of its obvious beauty, it has been highly sought by plant collectors since the age of Victorian plant collectors.  During this time many wild-collected clones were warded, but have since been lost.  In the 1980's, Kew gardens Jodrell laboratory propagated seeds from an accession originating in Costa Rica.  Since then there appears to have been numerous other introductions as this species has once again found favor and can be purchased from a few U.S. nurseries.
In the literature this species is regarded as difficult to grow and flower over a long period of time.  A friend, and accredited AOS judge, has suggested that much of stock available before the past 10-20 years was infected with virus.  Whether this is true or not remains to be seen, but what is true is that this species seems to have regained popularity and can be easily obtained from a number of U.S. nurseries, and in some cases at a more than reasonable price. 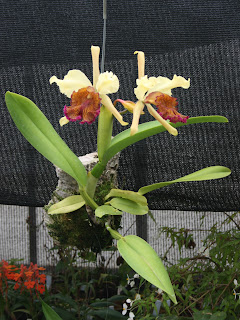 My lone specimen has been easy to grow and even vigorous, growing well mounted on a cork slab with a generous portion of New Zealand sphagnum as bedding.  It remained in the 2.25” pot for the first three years.  It has grown exceptionally better mounted that in a container.  On the cork slab, each growth has been larger than the last and it shows no signs of stopping. During the growing season from March until September, the plant receives daily watering and a humid atmosphere, but during the winter resting phase, I water only every 2-3 days and the atmosphere is less humid.  Under these conditions I have been able to grow a variety of Cattleya species that are considered difficult to grow.
The total flowering period lasted about 14 days.  I decided not to self-pollinate either of the flowers and let the plant achieve a greater size before subjecting it to the stress of reproduction.  For future reference, maybe there is a generous pollen donor out there somewhere?

Posted by Botanica Za Les at 2:45 PM No comments: